(DCEF) are excited to welcome the addition of Emily Ringham as the Fraternity & Foundation Administrative Coordinator, effective June 14, 2021.

“We are very excited to welcome Emily to the team and look forward to her experience and team-focused outlook, helping our staff and the DCEF continue to succeed,” Jerod Breit, Executive Director, said.

A native of Beech Grove, Indiana, Ringham joins staff after serving as an administrative assistant for the athletics department at Beech Grove City Schools since 2013. She previously served as the office manager for her family business, in addition to spending 14 years as a coach for women’s golf and basketball. Her accomplishments include a pair of conference championships.

“Emily’s diverse background will greatly compliment the continued growth and advancement of the DCEF’s mission to assist in the acquisition of a sound education,” Justin Sherman, Executive Director of the DCEF, added. “We are very excited to have her support and extend a warm welcome to our team.”

When she is not coaching, Ringham is an avid golfer and enjoys traveling, hiking, and sports. Her favorite teams are the Indiana Hoosiers, the Indianapolis Colts, the Indiana Pacers, the Chicago Cubs, and the Tampa Bay Lightning.

Every Delta Chi has a story and the Fraternity wants to hear yours!

We’re embarking on a new project — The Delta Chi Oral History Project — to collect the stories of alumni in their own words. These stories will be preserved in a book that celebrates the impact the Delta Chi Fraternity has had on your life and who you are today. Every year we don’t capture and preserve these stories feels like another opportunity lost, so we’re excited to get started!

I received an email/postcard/phone call from a company asking for my personal information and a story about Delta Chi Fraternity. Is this a legitimate project or is it a scam?

It’s legit! We have partnered with PCI (also known as Publishing Concepts) to produce an Oral History Publication for Delta Chi Fraternity. PCI is a family owned business based in Dallas, TX that has published directories for educational institutions, fraternities, sororities, and military organizations across the nation for almost 100 years. This project allows Delta Chi Fraternity to hear about your personal experiences and explain how Delta Chi Fraternity has helped shape your lives.

Does Delta Chi Fraternity benefit from this at all?

Yes, in a few different ways:

How do I know my information will only be used for Oral History Project purposes?

I would like to verify or update my information and share a story. How may I do this?

Can I choose what information prints in the publication?

When you call to update your information, you can tell the representative if you prefer any of your information be excluded. You can also communicate your preferences to PCI’s customer service helpdesk at 1-800-982-1590 / customerservice@publishingconcepts.com.

I updated my information but need some more time to think about what experience to share.

You can call back at any time to share your story.

I shared a story and the representative said I could send some photos. How do I do this?

You will receive an email with a link to upload up to two photos (black and white or color) plus captions.

If you have also purchased a book but do not have an email address on file, you will be sent a photo mailer to send physical photos in to be printed (note: photos will be returned if you include a self-addressed, stamped envelope).

Can anyone purchase a book?

I ordered a book / package over the phone and would like to cancel my order. How do I do this?

Delta Chi Returns to the University of Arizona

The Delta Chi Fraternity is excited to announce it will be rejoining the fraternity and sorority community at The University of Arizona, beginning in the Spring 2022 semester.

About The University of Arizona

Arizona is a public, research university home to more than 40,000 degree-seeking students and over 300 academic programs.

Arizona boasts a 15:1 student-to-faculty ratio and with a 46% diverse student body while also offering 600+ student clubs and organizations, promoting the institution’s core values of inclusion and exploration. Arizona ranks among the top research institutions in the nation ranking as 40th best public university by the US News & World Report.

If you have questions about getting involved with Delta Chi or assisting with this expansion, please contact Divante Hamilton, Director of Field Operations & Growth, at dhamilton@deltachi.org.

Find a Chapter
Start a Colony

At Delta Chi, you have the opportunity to become the man you were meant to be. Delta Chi believes in developing the whole person and helping our men become better people, not just better Delta Chis who are committed to making an impact on the world around them. 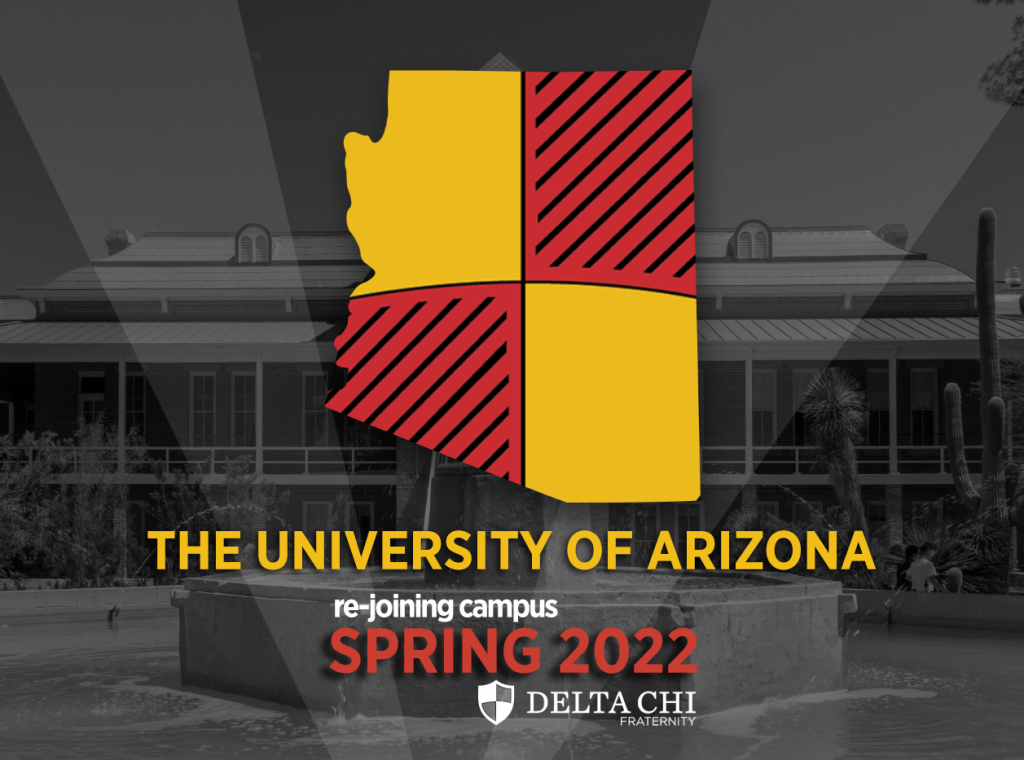 INDIANAPOLIS, Indiana – The Delta Chi Fraternity is pleased to announce the hiring of four Leadership Consultants. Taylor Anzivino, Eastern Washington ‘21, Armando Alanis Flores, San Antonio ‘21, Nathan Bothwell, Kansas State ‘21, and Hogan Veserat, Whitewater ‘20, will join the IHQ staff on June 7, 2021. In addition to the hiring of these new staff members, we are excited to announce the promotion of Kelby Schultz, Iowa State ‘19, and Jordon Thatch, Little Rock ‘18, to Coordinator of Field Operations positions.

Anzivino (he/him/his) joins the Fraternity staff after serving as “A”, “C”, Philanthropy Chair, and Scholarship Chair during his collegiate tenure at Eastern Washington University.  He earned a Bachelor of Arts in Music and was heavily involved in the institution’s choir programs. Anzivino traveled to Estonia to share American choral music and debut his first choral arrangement.

Flores (he/him/his) joins staff after earning a Master of Business Administration from Texas A&M University, San Antonio. During his time in Delta Chi, he served as Social Media Chair and “D” and was heavily involved in Student Government Association as the Vice President and Treasurer. Among his accomplishments, he served as a Financial Literacy Fellow, President of the Student Investment Organization, and was recognized with the institution’s “Spirit of the Jaguar” award.

Veserat (he/him/his) graduated from University of Wisconsin – Whitewater in May 2020 with a BBA, majoring in Finance and Marketing. He served his chapter in several capacities, including Co-Chair of the Fundraising Committee and the founding Chair of the Health and Wellness Committee. He demonstrated significant service to Whitewater’s student government, serving two terms as Student Body Vice President and as a senator. He was awarded the Wyman Distinguished Student Leader Award for his involvement throughout his academic career.

Schultz (he/him/his) joined staff the summer of 2019 as a Leadership Consultant after serving the previous summer as a Convention Intern. During his time as a Senior Leadership Consultant, he served the chapters of Regions V, VI, and IX, while also serving on expansion projects at Towson University, Creighton University, and University of Texas at Austin. He will continue to serve his chapter portfolio in this new capacity in addition to elevating the current services provided by the Field Operations team.

Thatch (he/him his) joined the headquarters team in June 2019 as a Leadership Consultant. Throughout his staff tenure, later going on to serve as a Senior Leadership Consultant, Thatch supported a large portfolio of chapters predominately across the Western United States and Canada. His coaching chapters include groups in Regions I, II, III, IV, and VIII, and he has served as expansion support for projects at West Virginia University and San Diego State University. He will continue to support his chapter portfolio in this new role in addition to new responsibilities.

As Delta Chi kicks off our annual Volunteer Appreciation Week, we are reminded of the value and importance of time in our lives. Time is the most precious commodity someone can share and we are grateful for the generosity of our volunteers who share their time with our members and Fraternity.

Volunteers play a crucial role at all levels of Delta Chi. Whether sharing your time as a facilitator for one of our educational programs, serving as a mentor, providing guidance as an International Committee member, or supporting our members as a “BB”, ABT, or Housing Corporation member, your contributions serve as an example for others. At a time when the need and desire for connection and belonging is as strong as ever, our volunteers continue to invest their time to enhance the lives and experiences of our members.

As Volunteer Appreciation Week continues, we hope that you will take some time for yourself and reflect on the positive impact you’ve made. From getting coffee with a student, attending monthly ABT meetings, scheduling a Zoom mentoring session, or giving up your nights and weekends to facilitate a program, THANK YOU for always going above and beyond and for your willingness to share your time and talents with our members.

If you’re interested in volunteering with a chapter or colony, please utilize the following resources:

If you do not see the information you’re looking for, you can contact a Regent, Board Member, or the International Headquarters staff by utilizing our staff contact page.

The best way to ensure that you stay up-to-date with all things Delta Chi is by keeping your contact information updated inMYDCHI.If you experience problems accessing MYDCHI, please contact Paul Bierman atpbierman@deltachi.org.

If you are interested in volunteering for a position with Delta Chi, please visit ourAlumni Resources Pageor ourAlumni Volunteer Resources Page. If you do not find what you are looking for, feel free to use theContact Pageto reach out to a staff member with questions.

INDIANAPOLIS, Indiana – The staff of the Delta Chi International Fraternity is happy to announce the hiring of Jessica Robinson as the Membership & Accounting Coordinator, effective April 5, 2021.

“I am excited to welcome Jessica to the Delta Chi team in such an important role”, Jerod Breit, Executive Director, said.  “Her talents during and after her undergraduate experience make her a great addition and will bring insight and innovation to a role that works closely with our Chapter and Colony “C”s and alumni.”

Robinson was born and raised in Indianapolis and attended Ohio Northern University, where she earned a bachelor’s degree in business. While there, Robinson was an active member in Delta Zeta and served as the Alumnae Relations Chair and Vice President of Programming. Outside of Delta Zeta, she was selected as a Rho Gamma, a counselor and confidant to women going through Panhellenic sorority recruitment.  Robinson also served on the Love Day Committee, a planning group for campus-wide service events.

After graduating, Robinson continued serving Delta Zeta through alumnae volunteer positions. Currently, she is the Delta Zeta Alumnae Chair for the State of Indiana and also serves as the Alumnae Relations Advisor for several undergraduate chapters.

“Jessica’s role ensures the accuracy of our membership data and will work on accounting duties essential to the organization”, James Ratliff, Director of Finance, said.  “Her education, skills, and sorority background fit very well with this role and I am excited for her to join the staff.”

The Anti-Hazing Coalition hosted a live nationwide presentation and discussion on Sunday, March 21, 2021. The AHC parents presented a program via Zoom and live on Facebook to share their sons’ stories and educate current students about hazing prevention. The program included Q&A with the parents.

These families each suffered unimaginable loss as a result of fraternity hazing. They are here to share their stories and to challenge ALL fraternity/sorority members to take up the fight to end hazing now. If we are not actively part of solving this problem, then we are responsible for its continued persistence. Whether you’ve been hazed, know that hazing is happening on your campus, or even if you’ve hazed one of your members in the past, we must all actively take part in this solving this problem so that no family has to endure this kind of tragedy. Let’s be the generation of fraternity and sorority members who end hazing once and for all.