The Distinguished Delta Chi Award recognizes significant achievement in an alumnus’ profession or outstanding civic service while upholding the values and ideals of the Fraternity.  This award may be awarded posthumously.

The purpose of the trip was to raise awareness and funds for MedCamps of Louisiana, an organization that serves children with developmental and physical disabilities.  Mason raised over $30,000 while completing his circumnavigation.

Kenneth Cooper was recently awarded an Emmy for Outstanding Directing for a Talk Show, Entertainment News or Morning Program for The Ellen DeGeneres Show.  He also received an Ethel Case Award for Acting Excellence for his role as Mickey Gorski in the Southern California production of “Greetings”.

Michael Indejan was recently awarded an Emmy as a producer for the show “Samantha Brown’s Places to Live” in the “Outstanding Travel and Adventure Program.”

As an award-winning Producer, Director and Writer in digital video, TV, film, and advertising, Brother Indjeian is the person that clients have consistently called upon to lead their most important projects.

Michael then joined 30fps Productions in New York, where he served as Vice President of Production for 13 years, earning more than 35 Clio and Telly awards for advertising and marketing. For over 800 projects, Michael supervised production operations, served as client point person and ran the entire production studio, while simultaneously directing and producing the workload. These projects consisted of commercials, TV and corporate long forms, for clients that include Sony, Pepsi, Avon, Gap, Hertz, Motorola, HBO, AMC, USA Network, IRS and Port Authority of NY/NJ.

After relocating to Los Angeles, Michael began directing and producing several TV series and films. These include “Oh, Ms. Tracy,” a Disney-superhero driven pilot, “Redneck Weddings,” an edgy reality-style series, “Ancient Tomorrow,” an adventure documentary series, and “Monster and Me,” a family-holiday film.

Michael returned to the East coast to team up with Super Bowl XLVIII and NJ Transit, producing and directing a massive multi-market campaign for the first-ever mass transit and cold weather Super Bowl, taking place in New York/New Jersey. Additionally, for NJ Transit, Michael produced, directed and wrote an award-winning educational film, “Chicken on the Tracks,” as part of a statewide campaign raising awareness to the dangers of trespassing on train tracks.

Throughout the years, Michael has produced, directed and written many independent short films. Of note, “Lucky Day” was a break-through film that received great acclaim and won Best Dramatic Short at the Long Island International Film Expo. Michael has had the privilege of contributing to some major TV and film productions that include Cinemax’s “The Knick” Season 2, HBO’s “Vinyl”, CBS’s “Forever” and “Teenage Mutant Ninja Turtles: Half Shell”. From these projects, Michael continues to expand his diverse experience and lends that expertise to each and every new project. 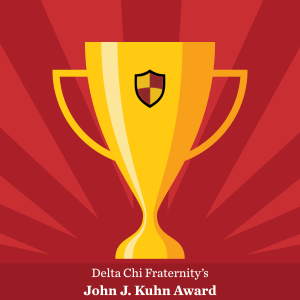 The John J. Kuhn Award is presented for service to the fraternity movement and is named after former Delta Chi “AA” and NIC Chairman John J. Kuhn, Cornell 1898.  It is presented to an individual who has made a significant contribution to the Greek movement.  This award recognizes individual accomplishments and contributions within the fraternity and sorority world regardless of affiliation.

Ned Kirklin’s contributions outside of the insurance realm are abundant; speaker at countless conventions and leadership conferences, participant in lobbying efforts for the fraternal experience, loyal donor to the Fraternity and Sorority Political Action Committee, collaborator with other industry vendors, and more. His generosity goes beyond his professional affiliation, as he has been a personal supporter of many organizations’ foundations due to his recognition of the value of the educational programming and support provided through foundation funding. Ned has remained a steadfast supporter of the NIC and fraternities over the past 30 years.

“Ned has been devoted to protecting the lives of fraternity men and sorority women for over 25 years,” a colleague of his said. “He has elevated the definition of fraternity, combining leadership and responsibility to our community. Ned has invested his time and resources developing risk management practices so that we can provide a safe environment for our members and guests.”