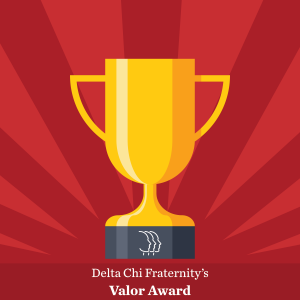 The Valor Award recognizes special acts of heroism on the part of any Delta Chi who puts his own life in peril. This particular award, with distinction for uniformed military personnel, is applicable to active duty members of the military of any country (Army, Marines, Navy, Air Force, Coast Guard, National Guard, and Reserve Members on Active Duty in Combat). This award applies to those who distinguish themselves conspicuously by gallantry and intrepidity, personal bravery or self sacrifice so conspicuous as to clearly distinguish them and must involve risk of life. Those who receive this award shall receive a certificate reading: the “Valor Award with Distinction”.

United States Marine Staff Sergeant and New York City Firefighter Christopher Slutman died on Monday, April 8, 2019 while serving in Afghanistan.  American military officials said Brother Slutman, and two other Marines killed, had been in a convoy near Bagram Air Base, North of Kabul, when it was struck by a roadside bomb.

Brother Slutman was a 15-year veteran of the New York City Fire Department, most recently serving Ladder Company 27 in the Bronx. In 2014, he was awarded a Fire Chiefs Association Memorial Medal for rescuing a woman from a burning building. He was also a longtime volunteer for the Kentland Volunteer Fire Department in Prince Georges County, Maryland. 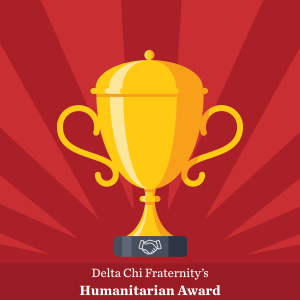 The Humanitarian Award is presented to a Delta Chi member (undergraduate or alumnus), who, through his actions, exemplifies the ideals of Delta Chi and promotes the welfare of another person or persons.

In 2016, Brother Zach Bolster and his wife Patricia were living in New York City when his mother was diagnosed with stage-4 pancreatic cancer. Working in the finance industry at the time, Brother Bolster and his wife dropped everything and traveled to Charlotte, North Carolina to care for his mother. As the chemotherapy treatments progressed, Zach began to notice a significant problem regarding the side effects of the treatment his mother was receiving. The medication and/or radiation left her unable to transport herself from the many appointments she had. They were shocked to realize how many patients were dangerously driving themselves to cancer treatments, unable to overcome the financial burden of the transportation needed, and unable to get to treatment.  They were saddened to realize that not everyone had the support system his mother did and many patients were missing critical treatments as a result. Zach began volunteering to personally drive patients to cancer treatments, and he and his family created a larger vision, one in which they would give back to others who were suffering from cancer and unable to get to their treatments.

ChemoCar’s mission is to provide free round trip transportation to chemotherapy, radiation, and non-surgical cancer treatments at Verified Treatment Centers.  While this was a robust problem, Zach and his wife felt they had a good solution.  They used platform integration with Uber and Lyft to provide a service for patients to schedule free rides, which can be obtained online. All costs for the rides are paid directly by ChemoCars through charitable donations and grants.  During their first year of operation, they provided over 2,000 free rides to cancer patients.  That number is increasing, as ChemoCars has expanded from their initial location in Charlotte to provide rides in Amarillo, Texas as well.  Today they provide between 700-1,000 free rides a month.  They continue to make investments in their IT systems and Zach hopes to be in a third city this year.  Ultimately, Zach’s dream is a nation-wide service.

It is clear Zach is passionate about ChemoCars and the opportunity to provide aid to people suffering from cancer, and he seeks every opportunity to gain supporters.

This year, he presented to and won the grand prize at Seed20, ChemoCars reached the finals of the 24Foundations Fierce Fourteen, and his efforts have gained national exposure from news organizations such as CBS News and People Magazine.

Zach and his wife share a passion that is providing a wonderful service to thousands of people during one of the darkest periods in their lives.