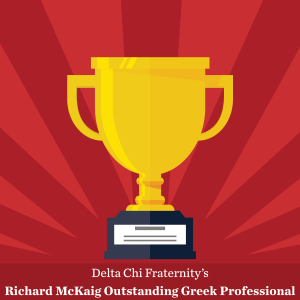 The Richard McKaig Outstanding Greek Professional Award is typically awarded to one campus-based professional per year.  This award was previously known as the Outstanding Greek Professional Award and was renamed after Brother Richard McKaig, often referred to as the “Fraternal Dean”, in 2009 to coincide with his retirement from Indiana University.  To qualify for this award, an individual must be a student affairs professional who has given exceptional service to the Greek Community.

Dr. Matthew Richardson currently serves as the Director of the Office of Fraternity & Sorority Life.  Brother Richardson is a change agent and a passionate servant to the fraternity and sorority movement.  Reaching the Summit: Plan for Excellence in Fraternity & Sorority Life was authored by Matthew (in consultation with other university administrators, students, alumni, and headquarters partners) and is evidence of his innovative response to serious challenges facing our movement today.

Brother Richardson’s plan established a working group of students, alumni, and national headquarter partners that were tasked with creating a strategic plan for the future of Fraternity and Sorority Life at West Virginia University.  Long and short range goals were established in terms of membership and academic achievement, which included minimum requirements for joining and maintaining membership in Greek Life.  New community standards were developed and mandated by the office of the President regarding social fraternity and sorority activity.  Some of theses standards include regular advisor trainings sponsored by Fraternity and Sorority Life, stronger partnering with NIC/NPHC/NPC for support, and a shorter period (four weeks) for new member education.

Reaching the Summit also recognized major hurdles that hindered the success of the WVU fraternity and sorority life in the past, resulting in a plan that includes continuous education surrounding sexual misconduct, hazing, alcohol and other drugs, racism and prejudice, physical violence, and community standards.

Reaching the Summit was adopted in 2018 to serve as a strategic plan to better align each Greek organization with the values of WVU.

Brother Richardson is steadfast  in his mission to develop students holistically.